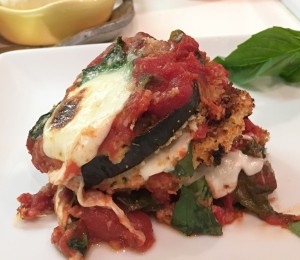 Women have helped me be more creative with my cooking.

Not so much with the recipes, but with their peculiarities.

For instance, Selma Krapoff, our Head of Slim Merch, is on a new kick. She wants protein with every meal. And nothing can be fried. Not even sautéed.

So when I had a craving for eggplant Parmigiano, I had to get creative. I didn’t want to cook two dishes. I racked my brain, what’s left of it. Then it hit me like a frying pan. Or maybe it was Selma who hit me with the frying pan. The light went on above my horsehead, and I knew what I had to do.

I put in the tomato sauce, mozzarella, Parmigiano and basil with each layer, of course.

Then I baked it for about 20 minutes.

It was so good. Selma loved it.

Then she yelled at me because she ate too much. She told me that if I didn’t cook stuff that tasted so good, she wouldn’t have to worry about getting fat. 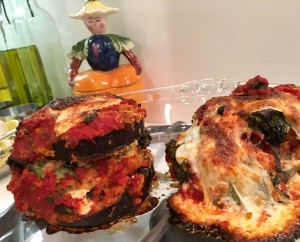 Your breasts and the eggplant should be about the same size. So should the chicken breasts.

Then I sliced the eggplant into circular slices, about ½” thick.

You only have to broil the chicken for a couple minutes per side. It will bake with the eggplant for another 20 minutes in the oven, so you don’t have to worry about salmonella.

Seriously, Slim People? Clean everything that touches raw chicken with warm, soapy water. Or a powerwasher.

You gotta keep it clean. 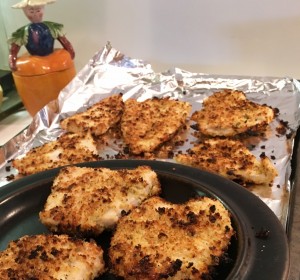 2 large boneless, skinless chicken breasts (about 1 pound) each sliced in horizontally in half; you should have 4 cutlets about ½” thick. Cut each in half vertically, now you got 8 cutlets, each ½” thick, capisce?

3 cups of tomato sauce (make your own, it’s so easy and takes just 25 minutes!)

Pre-heat your oven to 400 degrees.

Put the eggs in a bowl (I used a glass pie dish), add salt and pepper, and mix ‘em up!

Spread the breadcrumbs out on a large platter (I used another pie dish).

Dip an eggplant slice in the egg, then press each side into the breadcrumbs.

Place on a non-stick baking pan.

Do this with all the eggplant slices.

Put the pan in the oven on the second-lowest rack, let the eggplant cook on one side for 12 minutes, or until golden brown. 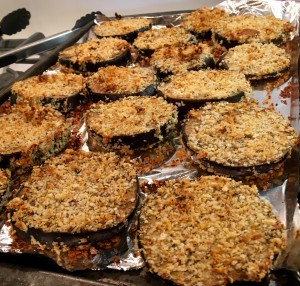 Flip each slice over and cook for another 12 minutes or so.

Turn the oven to broil.

Take a piece of chicken.

Dip it into the egg.

Then press each side into the breadcrumbs.

Do this with all the chicken.

Place it under the broiler, on the second rack. You don’t want it too close, or it will burn.

After 2 minutes, or when golden brown, turn over.

Cook on the other side for 2 minutes or until golden brown.

Remove from the oven.

Get a glass baking dish–I used an 9X13-inch dish.

Put a layer of eggplant on the bottom.

Add a cup of tomato sauce, spread it around evenly.

Add ¼ cup of the basil, snip it with scissors evenly on top. 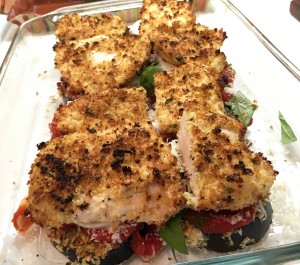 Add a layer of chicken cutlets.

Add a layer of eggplant.

Add the final 1/3 cup of mozzarella. 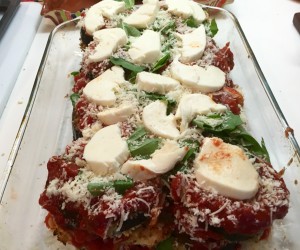 Put the dish in the oven on the middle rack.

Let the eggplant and chicken bake for 20 minutes.

Put the oven on broil.

Put the dish under the broiler FOR A MINUTE! Keep your eye on these guys, you want the cheese golden brown, not burnt!

Remove from the broiler and let it sit for 5 or 10 minutes.

Then, cut it up, dish it out, maybe sprinkle a little freshly-grated Parmigiano on top of each serving, maybe garnish with a fresh basil leaf or two, and… 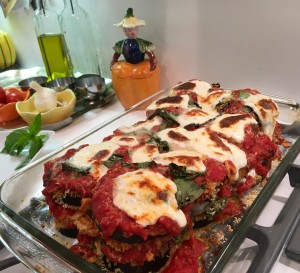 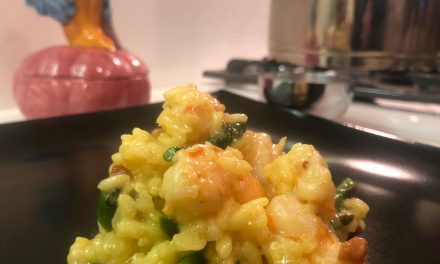