Pasta Carbonara with Normy and Sam at Odessa 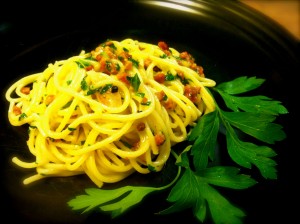 It was by far the biggest paying gig ever offered to the Slim Men. Not only that, but the promoter was going to put us up in a nice hotel, and buy us all dinner and drinks at the club after the show.

The club was called Odessa. It was a fine-dining, elegant nightclub/restaurant in Laguna Beach, California. Swanky.

Because it was so swanky and brand spanking new, and because they were paying us a lot of do-re-mi, we decided to pull out all the stops. We invited some guest soloists — guitarist Richard Smith and trumpet player Tony Guerrero.

We made sure our shoes were shined, and our suits were pressed, and our wigs were in place. Showtime!

John E Coale was on drums. The keyboard player that night was David Bach — it was one of his first shows with us. Mombo Hernandez played percussion. It was crowded, a good turnout of Slim People. Odessa had a 1960s supper-club vibe. Well-dressed guests sat at well-dressed tables and enjoyed dinner as they watched the show. We were scheduled to do two 1-hour sets.

We did the first set. We sounded OK — we were just starting to catch our stride when we had to take a break to do a drawing. In between sets, they had scheduled a drawing for dinner with the band after the show. They brought a big fishbowl filled with tickets up to the stage. I picked a number from the bowl and called it out to the crowd. There was a short silence. A guy stood up. He didn’t yell or scream. He just stood up and sauntered to the stage.

He was tall and thin, with blond hair. He was dressed casually, and had a loopy grin. He showed me his ticket. He had the winning number. So this guy and his guest were gonna join us for the post-concert dinner and celebration, a little after-party slurp and chew.

The Slim Dudes went back on stage and did our second set. There were a couple of rough spots. At one point, Richard Smith came up to me after playing guitar on a couple of songs and said,

“Nice trying to play with you.”

But the Slim Men pulled it together. The crowd seemed to enjoy themselves. Nobody threw anything at us and nobody left. After the show, we walked over to the restaurant area of the club. They had a huge table set for us. Each setting had more forks and knives than anyone would ever need. I sat next to the couple who won the dinner drawing. It turned out to be quite a conversation.

Normy was kinda quiet, and kinda quirky. His wife, Sam, was sweet with a quick smile.

Normy and I started talking, and he told me that he made clay models for Porsche. Clay models are what they use to create the shells for the bodies of actual cars. And Normy worked with the designers making new Porsche sports cars. I’d been to the Porsche factory in Stuttgart, Germany. I did a private party there. Normy and I talked about sports cars, clay models, Porsche, Stuttgart, horsepower and how Normy did what he did. It was an intriguing conversation.

We ordered food. We got appetizers. We got soups. We got salads. We drank more than a few bottles of wine. We had main courses. We had desserts. We had after-dinner drinks.

It must have been around midnight when the waitress – who had been working so hard all night – gave me the bill. I was kinda embarrassed, but I told her that the promoter was picking up the tab. She told me the promoter was nowhere to be found.

I got up, and started looking around the club; in front, out back, the men’s room, the ladies’ room, under tables, in the kitchen – I looked everywhere. I called him. I called the hotel. I sent out smoke signals, helicopters, and drones. Promoter dude had vanished.

So I took out the old credit card, and prayed that the cops wouldn’t leap out of the woodwork and arrest me on the spot when it got declined. The wine alone must have cost a thousand bucks. Twelve courses for twelve people in a place like that? I was just hoping I wouldn’t have to wash dishes for the rest of my life.

My card went through. I didn’t want to chance it with a tip, so we gathered some cash, and gave it to the waitress.

We left the club that night a bit weary, kinda dreary, somewhat embarrassed, and a lot lighter in the wallet. We went to our hotel rooms and crashed. The next day, I was checking us all out of the hotel, and discovered the promoter had not paid for the rooms. Ouch.

He never sent me the money he owed, and it was a lot. I never heard from him again. I ended up paying the band anyway. It was a huge loss, but…

They came to Catalina Island a few years ago to see the Slim Man Band at the Jazz Fest. We went out afterwards, and Normy had quite a few festive beverages. In his defense, Catalina doesn’t allow cars, people walk everywhere, so everyone tends to drink a bit more than usual. We were playing pool at a local bar when Normy started shouting at the band,

He kept saying it; over and over, louder and louder. Quiet Norm was so loud and boisterous, that we ended up leaving the pool hall – after some encouragement from the staff and patrons. We walked on to the small streets of Catalina and Normy kept on yelling,

“REALLY! I’M NOT JUST SAYING THIS!! I REALLY LOVE YOU GUYS! REALLY!”

Sweet Sam finally dragged him back to his hotel room, screaming “I LOVE YOU!” all the way.

The next morning, the Slim Man Band had breakfast with Normy and Sam. Normy was unusually quiet, turning whiter shades of pale with each bite. We quietly told him we really loved him, too. Really. To this day, when we see him, that’s what we say. 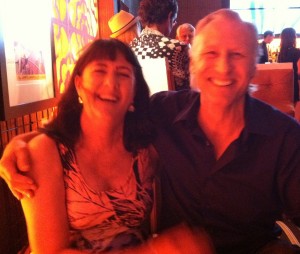 Normy and Sam pop up a couple times a year at Slim Shows. They don’t ask to be put on the guest list. They don’t call in advance. It’s always a pleasant surprise when they show up. They usually manage to stay in whatever hotel the band is staying.

Two weeks ago, I was in Palm Springs, California. Normy and Sam came out to see me play at a super swanky hotel called The Riviera.   We had dinner that night after the show. We partied in the hotel room after dinner, drinking wine and whatnot.

We had a wonderful time.

Here’s the thing – I would never have met Normy and Sam if it weren’t for the Odessa gig.

Sure, I lost a ton of dough. But would you trade two good friends for ten grand?

Let me think about that one…

If you’ve been through a tough time, and you need a “What the hell, might as well” sauce, have I got a dish for you.

I eat pasta carbonara a couple times a year. Any more than that and you’ll have to walk around with a defibrillator duct-taped to your chest.

It’s a heart-stoppin’, artery poppin’ dish, but it’s one of my favorites. As soon as you try it, it’ll be one of your favorites too! This is my own version. I added white wine, which gives it a little kick.

The name ‘carbonara’ comes from the Italian word for coal, carbona. Legend has it that coal miners would put a couple of eggs, a piece of pancetta (Italian bacon) and a hunk of cheese in their pockets, and make this dish on their lunch break, using just one pot.

Putting eggs in your pocket doesn’t sound like a good idea to me, especially if you’re mining, but what the hell do I know? 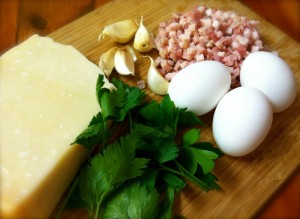 Crushed red pepper (I start off with ¼ teaspoon)

4 cloves of garlic, peeled, and smashed/flattened with the broad side of a knife

We’ll do this all in real time.

Get a large pot. Fill it with cold water. Put it on the highest heat. This is for the pasta. As it heats up…

Get a large bowl, one big enough to hold all the pasta and other goodies.

Break the eggs into the bowl. Add the cheese. Add the chopped parsley. Add some fresh cracked black pepper.

Beat all this goodness with a fork. Now let’s cook our pancetta.

Pancetta is Italian bacon. So treat it like bacon. Don’t be flippin’ it all around. You want it to brown on each side. It’s tough to brown pancetta that’s been diced, but you can try!

Get a small sauté pan. Put it over medium heat. Put the diced pancetta in. Let it cook until it’s brown, about 4 minutes.

Flip it over, give it a stir, and cook until it’s brown on the other side, about 4 minutes.

When the pancetta is done, turn off the heat, and use a slotted spoon to get it out of the pan. Put the pancetta in a small bowl and set aside.

You should have some pancetta drippings left in the bottom of the pan. You’ll need about a tablespoon to cook the garlic. Get rid of the rest.

Put the pan on medium-low heat.

Add the crushed red pepper and the smashed garlic, cook 2 minutes until the garlic is golden and turn it over. Cook for 2 minutes more.

Turn the heat to high. Add the wine; let it cook off for a minute or 2 while stirring. Turn off the heat.

Now back to the pasta…

When the pasta water comes to a boil, add a couple tablespoons of kosher salt.   Add the pasta.

Follow the cooking instructions on the pasta box. Two minutes before the pasta is supposed to be done, take a piece and bite into it. Look at the center of the pasta. If it looks chalky, it is not done. Check the pasta every 2 minutes. It might take longer than the instructions say. When the pasta is al dente, not chalky or chewy, drain it well.

IMMEDIATELY put the pasta into the bowl with the eggs and cheese and parsley. You want the heat from the pasta to cook the eggs. Add the garlic and white wine from the small sauté pan. Toss gently. Add the cooked pancetta, and toss gently.

Dish it up! Garnish with a piece of parsley, and… 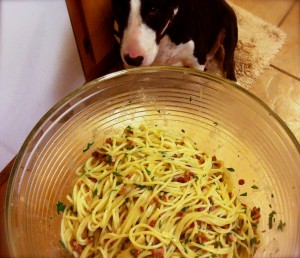 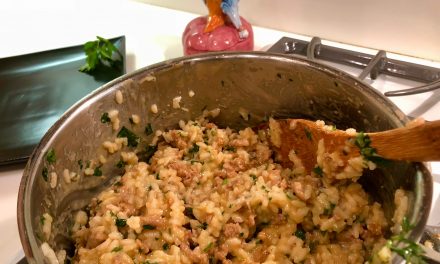 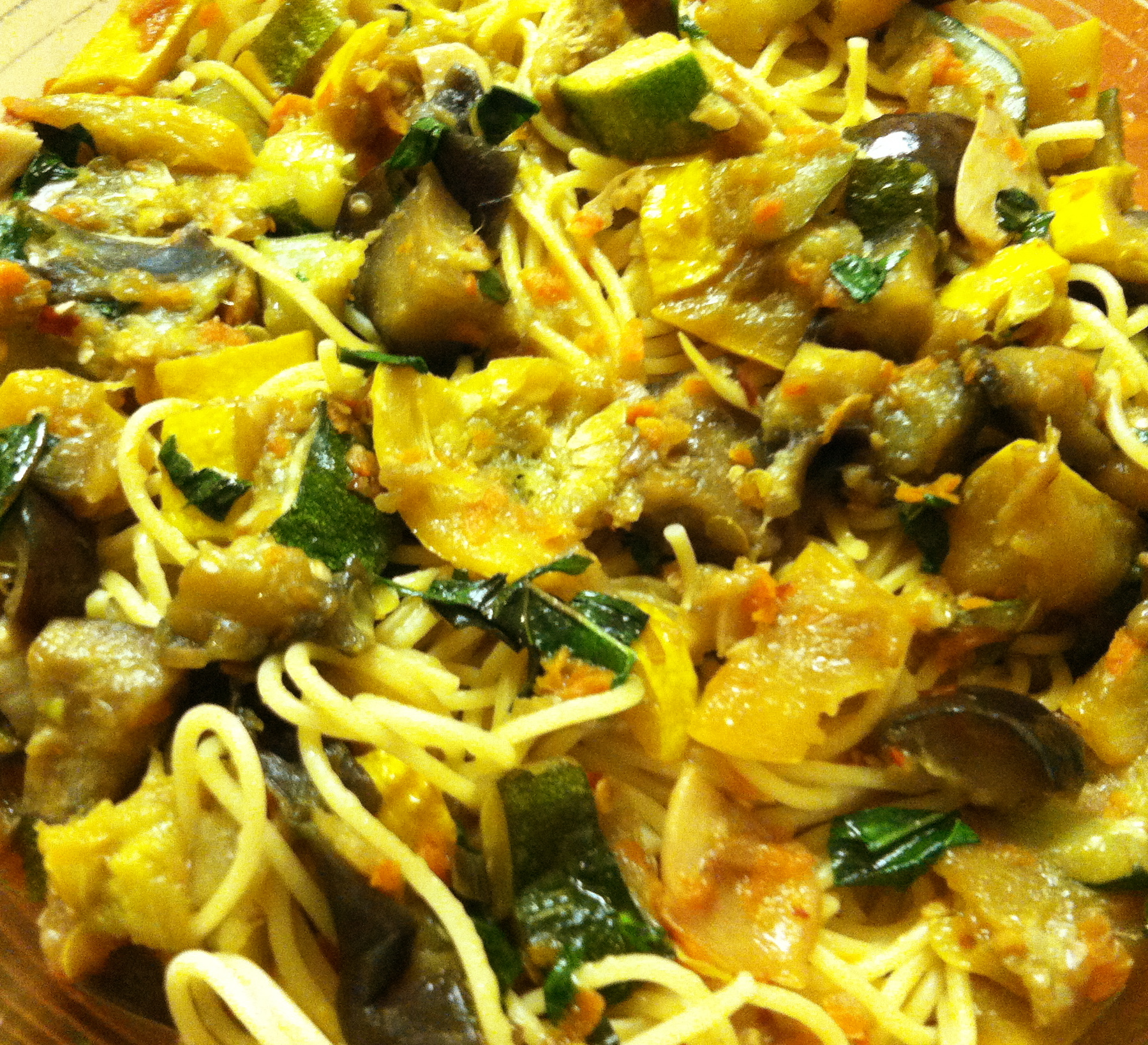