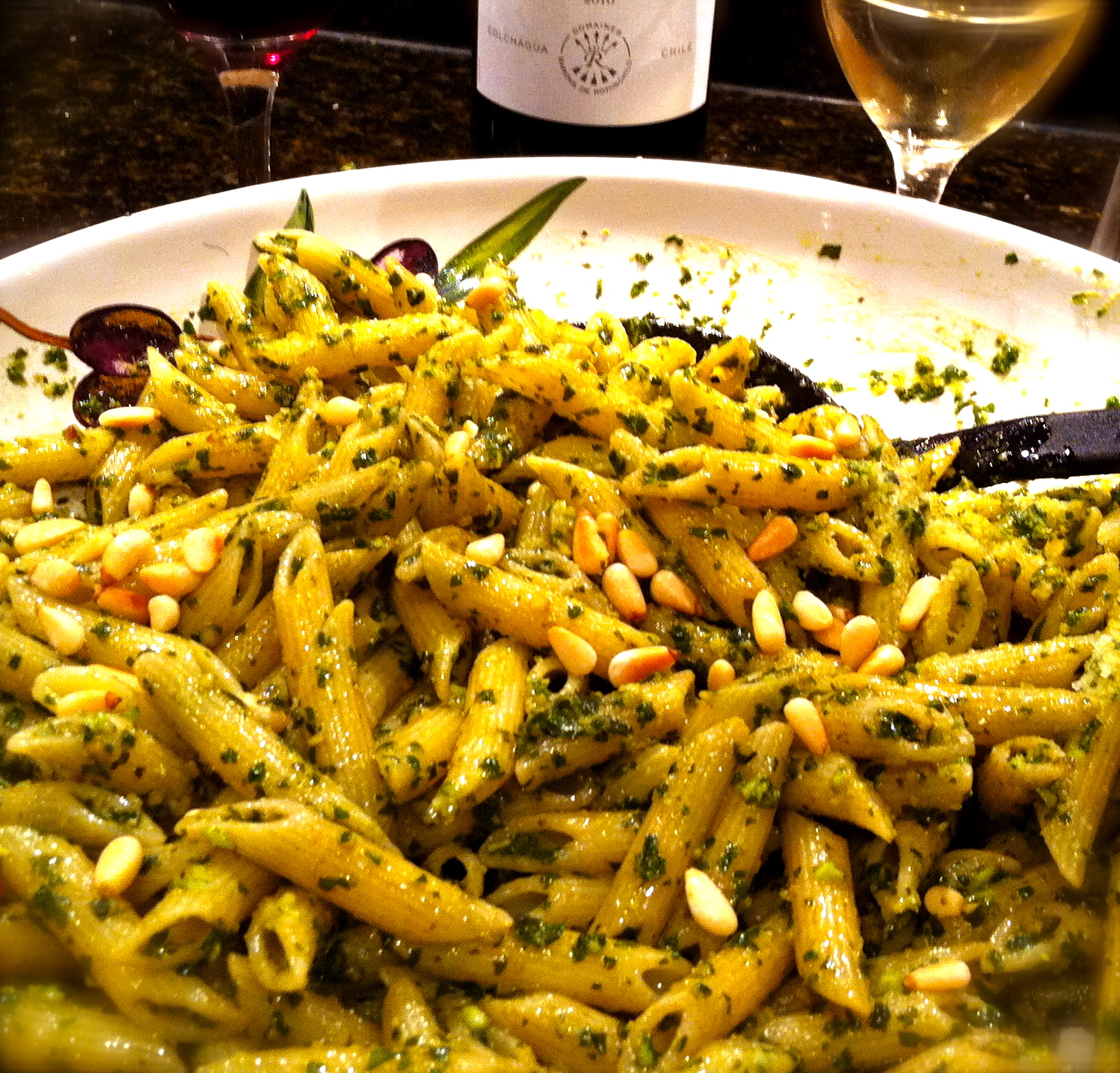 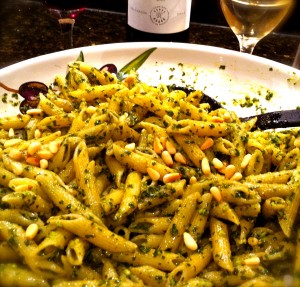 Pesto and Fishing with Paps

My Dad walked into the TV room on the second floor and his head was bleeding. We three kids were trying not to laugh.

My Dad had a workbench in the basement. The ceiling was low, and there were two large iron water pipes right behind the work area. When you turned around to go upstairs, you had to duck under the pipes to avoid cracking your skull.

My Dad hit his head all the time. You could hear the “BOING!” all the way up on the second floor. It was always followed by a yell,

We three kids thought it was the funniest thing in the world.

Maybe it was because we loved the Three Stooges so much. Maybe it was something else. Whatever it was, when our Dad hurt himself, we found it ridiculously funny.

We called my Dad “Paps.” He was a professor of literature at the State University of New York, and one of his favorite books was The Adventures of Huckleberry Finn. Huck had an alcoholic father who used to get drunk, beat him and chain him to chairs. Huck called his Dad “Paps.” I read the book and thought it would be funny if we called our Dad “Paps”, too. It stuck.

For the record, our Paps did not get drunk and beat us and chain us to chairs. But I’m sure he might have felt like it when we laughed at his bleeding head.

Paps used to take us fishing. It was a lot of fun for us. It couldn’t have been fun for him.

Fishing seems like a cruel sport. Somebody finds out what your favorite food is and what time you like to eat. They dangle it front of you, and when you take a bite; they hook you by the lips and drag you around.

One summer, my Dad and Mom rented a house near the beach on Fenwick Island, Delaware. It wasn’t fancy; just a simple white cottage on stilts by the Atlantic Ocean. We had the place for a week. There was a boat rental place on the bayside not far from the house. 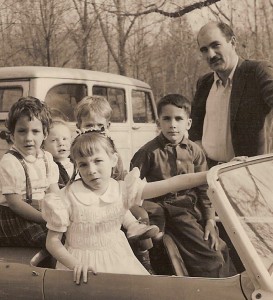 That’s me in front of my Dad

One sunny summer day, Paps piled us three monsters in the back of the pale green Plymouth station wagon and drove over to the boat rental place. He rented a small wooden boat with an egg-beater engine on the back. He grabbed his rods and reels, the bait, and us three knuckleheads, and we walked out on the pier.

There was a boat ramp on the side of the pier. The tide was high, and the ramp was covered in water. People were slowly backing their boats down the ramp and into the bay. On the other side of the pier were the rental boats. We all piled into one, Paps pulled the starter cord, and the motor revved up. We went motoring away, out into the wild blue yonder.

Little Assawoman Bay. That really was the name of the bay. Big Assawoman Bay was the larger one, right next to it. It sounds like I’m kidding, but I’m not.

We motored out for quite a ways and dropped anchor in Little Assawoman. My Dad got all of our rods baited up and we dropped our lines into the water. Then he got his rod, attached his brand new lure, and casted. He slowly drew the line in. We kids sat and waited for the fish to bite. We were not patient children.

Paps usually stood at the front of the boat. His back would be to us. I would sneak up behind my Dad, and jiggle the butt end of his fishing rod, so it felt like he had a fish.

Paps would jerk his rod suddenly and pull his line toward him like he was landing a blue marlin.

Then he would realize I’d played a joke. I’m surprised he didn’t throw me overboard.

We didn’t take fishing very seriously, but my Dad did. Anything my Dad caught, he’d keep. He once caught an eel, kept it and made a tomato sauce with it. It was awful.

Paps would catch blowfish and keep them. Blowfish puff up like balloons when you catch them. Most people don’t eat them. My Dad did. We didn’t.

Paps could have pulled an old tire into the boat and I’m pretty sure he would have tried to make a sauce out of it. Just about anything he pulled into that boat, he’d keep.

That day, when we were fishing off the side of the boat, my Dad’s rod bent over. He must have hooked something big. Or heavy. Or both. He reeled it in. It took him a while. Keep in mind; we’re in the Little Assawoman Bay. Not a lot of real big fish in there.

When Paps got it to the side of the boat, he screamed for us to get the net. We scrambled, and the boat started rocking, almost knocking him into the water.

I got the net, and pulled this big, ugly fish on board. It was the ugliest fish I’d ever seen. It had a big, wide mouth, with nasty-looking sharp teeth. My Dad’s brand new and very expensive lure was stuck in the back of the fish’s mouth, right behind all those sharp teeth.

Paps decided to cut off the fish’s head right then and there, and retrieve the lure later. He cut off the head, and threw the body of the fish back in the water. Paps put the bloody severed head of the fish on the bottom of the boat. It was a joy-killer. We kids wanted to go back in.

Paps didn’t look too happy as we pulled in our lines. He pulled up the small anchor, and we headed back to the pier. It took us a while. My Dad wasn’t the greatest captain in the world, but we eventually found our way back, after hitting a couple of sand bars, and missing a couple buoys.

Paps pulled the boat up to the pier. We tied it up, and we three kids got out of the boat and stood on the pier. My Dad stayed in the boat. We watched as Paps grabbed the bloody fish head, and stuck his hand inside its mouth to pull out his pricey lure.

The severed fish head clamped down on my Dad’s hand.

Paps let out a yell, and tried to shake off the fish head. It wouldn’t release its grip. Paps was waving his hand in the air, thrashing his arm around, but the severed fish head wouldn’t let go.

We kids would have tried to help him, but we were laughing too hard.

The dead fish head eventually released its grip, and got flung way up in the air. It landed in the water with a splash. My Dad’s very expensive lure was gone. His hand was bleeding. He got out of the boat, and walked past us hyenas to the boat ramp.

Paps walked down the boat ramp. He was going to rinse his bloody hand off in the bay water. Only problem was -the tide had gone out. The ramp was covered in slick wet moss. When my Dad hit the slippery part, his feet flew up in the air, and he let out a yell,

Then he landed on his ass with a thud you could hear across the ocean. People in Paris felt a rumble. We saw the whole thing. We could not stop laughing. I’m surprised we didn’t roll off the pier and fall in Little Assawoman Bay.

Paps was lying there on his ass, hand bleeding, and having trouble getting back up. He kept slipping. All we could do was laugh. Seriously.

This was probably one of those times when Paps might have felt like getting drunk and beating us and chaining us to a chair. But he didn’t. Whenever I told that story, he’d be the one laughing the hardest. 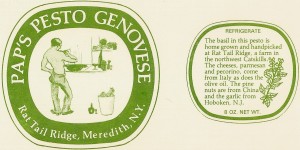 Paps made pesto before pesto was cool. He had a bunch of basil beds in front of his cabin on top of the Catskill mountains. Rat Tail Ridge. That’s what his place was called.

When the basil was ready, we’d pick it and go back to the house. We’d wash the leaves, and Paps would make pesto. He put it in small jars and sold it to local food stores. It was really delicious.

Pesto in Italian means paste, and this blend of basil, cheese, garlic, pine nuts, and olive oil is delizioso. The recipe originates in Genoa, Italy. I had to Slimmify it a bit.

I like to use toasted pine nuts, rather than plain. Toasted pine nuts taste better, that’s all. I place a dry skillet over medium-high heat, toss in the nuts, and flip them around ’til they’re light brown. Keep an eye on your nuts–don’t burn ‘em!!

This recipe calls for both Parmigiano-Reggiano and Romano Pecorino cheese. Parmigiano is a sweeter cheese. Pecorino is saltier. The blend of the two is wonderful.

However, in a pinch I have used just Parmigiano, and it tastes great like that, too.

Paps used pesto in all kinds of dishes. He put it over pasta. He used a dollop in soups. He made omelettes with it. Use your imagination – I’ve put it on chicken and fish. I once made shrimp with pesto for the Food Network.

Makes one generous cup of pesto. 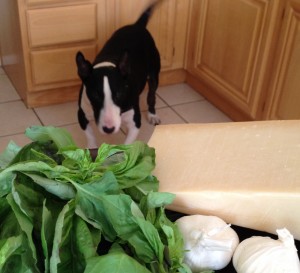 Put the basil, ½ cup of olive oil, 4 tablespoons of the toasted pine nuts, the garlic and the salt in a blender and blend, baby, blend. You can also use a food processor.

When everything is smooth, transfer to a bowl and slowly blend in the grated cheeses by hand. Or better yet, use a spatula. 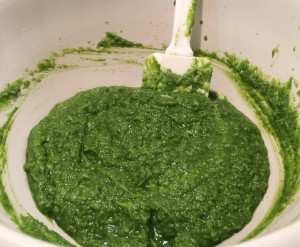 If you want to serve it over pasta, farfalle works well.

Get a large pot, fill it with cold water, and put it on the highest heat. When it boils rapidly, toss in 2 tablespoons of kosher salt and a pound of pasta.

Follow the cooking instructions on the side of the pasta box. Two minutes before the pasta is supposed to be done, start tasting. Take a piece of pasta, and bite into it. If it’s chalky in the center it is not done. Check the pasta every 2 minutes or so. It might take longer than the instructions on the box say.

When the pasta is firm to the bite (al dente), drain and transfer it to a warm bowl. Drizzle with 1 tablespoon of olive oil and mix.

Scoop some the pesto sauce from its bowl, about ¼ cup, and add it to the pasta. Toss well, but be gentle. You can add some more pesto if it doesn’t look like there’s enough.

Dish it up! Put a small amount of pasta on a plate. Add a little sprinkle of grated cheese, Parmigiano or Romano or both.

Take some of the remaining toasted pine nuts, and sprinkle on top.

Sometimes, I’ll broil a couple chicken breasts, chop ‘em up, and add them to the pasta. Delizioso! 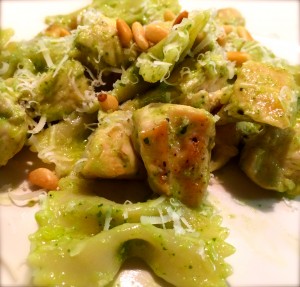 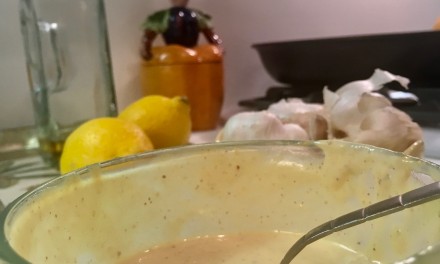